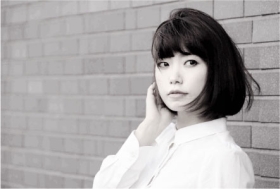 Mieko Kawakami was born in 1976 in Osaka prefecture, the second largest Japanese capital and the center of commerce and culture. Kawakami started her career as a singer songwriter before making her literary debut with the prose poem, "Sentan de sasuwa sasareruwa soraeewa" in 2006.

Her first novella My Ego Ratio, My Teeth, and the World​, published in 2007, won critical acclaim for its earnest exploration of the subject "I" through a lyrical narrative interwoven with rhythmic and poetic style. The novella was awarded the Tsubouchi Shoyo Prize for Young Emerging Writers (Haruki Murakami won the same prize for the established writers category in the same year).

In the following year, Kawakami published her second novella Breasts and Eggs, which dynamically explores the inner conflicts of an adolescent girl, who refuses to communicate with her mother except through writing. This work won the Akutagawa Prize (the most prestigious literary prize in Japan, previously awarded to writers such as Kobo Abe and Kenzaburo Oe) with enthusiastic support from committee members, and has been translated into Norwegian, Spanish, French, and other Asian languages.

In 2009, Kawakami published her first full-length novel, Heaven. Gaining inspiration from Nietzsche's Thus Spoke Zarathustra, the work takes up the theme of bullying in middle school and addresses the ultimate question of good and evil. The novel won critical acclaim soon after its publication and won the Ministry of Education's Fine Arts Award for Debut Work, as well as the Murasaki Shikibu Prize (an award given to female writers). This novel established Kawakami's position in contemporary Japanese literature only three years after her debut.

In her subsequent works, Kawakami continues to address existential questions such as life, death, and sexuality, giving voice to the feeling of disorientation that people innately harbor but which often goes unexpressed. These works include the collection of short stories Dreams of Love, Etc., which won the Tanizaki Jun'ichirô Prize, and her second novel All the Lovers in the Night, a love story centering upon a female protagonist whose profession as a proofreader is central to her worldview. Her third novel Longing captures the dizzying sensations of experiencing the world through the eyes of children, shifting between the perspectives of a boy and a girl.

Alongside these works of prose fiction, Kawakami has published experimental works that combine astute thought and feminine sensibility in a heightened poetic style. Her versatility in style and genre is partly what makes her a unique writer. Her collection of prose poems Sentan de sasuwa sasareruwa soraeewa, which includes the piece that pushed her onto the literary stage, sold exceptionally well and was awarded the Nakahara Chuya Prize (one of the most prestigious prizes for Japanese poetry). Her poetic works explore experimental language and rhythm, and have received high praise for their lyricism and linguistic and philosophical diversity. Her subsequent poetic work Water Vessel (awarded the Takami Jun Prize) also received critical acclaim, and many praise her experimental works even above her novelistic achievements.

In 2017, Kawakami conducted and published a book-length interview with Haruki Murakami, titled The Owl Spreads Its Wings with the Falling of the Dusk. In 2019, she published a novel, Summer Stories (winner of the Mainichi Publishing Culture Award, previously awarded to Jun'ichirô Tanizaki's The Makioka Sisters). This work is an expanded version of her 2008 novella Breasts and Eggs, and takes as its broader subject the precarity of women's lives, reproductive ethics, and the possibility of liberation. Mixing comedy and realism, the novel presents an epic life-affirming journey about finding one's inner strength and peace. The 2019 novel Summer Stories was published internationally with the title, Breasts and Eggs, in April 2020.